Citizens are finally getting the urban patios and parks promised when the cramped medieval city was extended in the 1900s.

[…] Until recently, Barcelona’s debate about public space was defined by the conflict between residents and mass tourism. Now it’s Covid-19 that has pushed the issues of space and pollution to the top of the political agenda. […] “Covid has changed the debate on public space,” said Olga Subirós, a Barcelona architect whose installation on urban pollution, Air, will be presented at next year’s Venice Biennale. “Now we understand that it’s not just about the ground beneath our feet, but the space around us and the air that we breathe. We need to think in cubic metres, not just square metres.”

For her project, Subirós teamed up with 300,000km/s, a firm of architects that specialises in analysing urban data, to draw up maps of the city highlighting pollution, car ownership, income, healthcare and other factors. The maps reveal that most of the worst-affected zones are in the Eixample, the area that is now the focus of the city’s plans to give people priority over cars.

[…] “We don’t know how long Covid will be with us, but what we have is a permanent pandemic, which is the air, it’s not a virus,” said Subirós, citing local health authority data that links car pollution directly to around 1,000 deaths a year in Barcelona. “People think they have a right to go where they like in a private vehicle, but it’s not a right, it’s a privilege. What is a right is the right to breathe clean air. Individual rights shouldn’t be allowed to take precedence over the rights of the collective.” 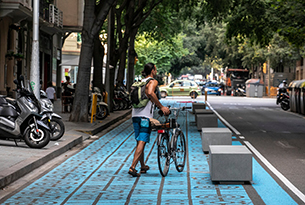 99+ Imaginaris. Olga Subirós participates with 300.000km/s to the exhibition at MODEL Architectures Festival of Barcelona